The day they drilled into my father’s brain, it was warm out.

Unable to bear the hospital waiting room, my mother and I strolled along Toronto’s Queen Street, waiting for the hours-long operation to be over.

That morning we’d accompanied him to Toronto Western Hospital for his 6 a.m. check-in. We waited while he changed into a hospital gown, booties and a little cap. We stood by as the surgical staff injected his scalp with painkillers and screwed a metal frame into his skull. Then we left him.

The medical team needed the guidance of an alert patient to implant electrodes in the exact right place.

We left him before the neurosurgeons drilled matching holes the size of a dime into the top of his head. We left them to implant electrodes into the grey matter of his brain. “Make a fist,” they told him. “How does this feel?”

My father, Terry McCartney, was awake for the entire procedure, doing his best to comply.

A successful DBS surgery can help alleviate the symptoms of Parkinson’s disease — the freezing, the tremors, the shuffling gait. A few electrodes stuck into the correct bits of his brain, connected to an adjustable battery pack implanted in his shoulder, and my father, our cyberman, would be ready for the world again. Ready for the rest of his life. Not cured, surely, but better. In control.

After many hours, the surgeons filled up the boreholes to his brain with cement and wheeled him into the recovery room. He was alive, and we were hopeful.

‘We’re lucky we live in Canada’

Canada is considered a world leader in Parkinson’s research. Doctors from across the globe come to study at Toronto Western with some of the best DBS neurosurgeons on the planet.

Our contributions have come from across the country.

Since his operation in 2010, he’s enrolled in ballet lessons designed for Parkinson’s sufferers. He’s taken up yoga. He does physiotherapy; alone, mostly.

In 1961, Montreal doctor André Barbeau was the first to discover that Parkinson’s was caused by a deficit of dopamine.

The Michael J. Fox Foundation — launched by the Edmonton-born, B.C.-raised actor — has invested hundreds of millions in Parkinson’s research.

And at the University of Saskatchewan, promising stem cell research could lead to a possible cure for the disease.

“We’re lucky we live in Canada,” my father’s said to me more than once. 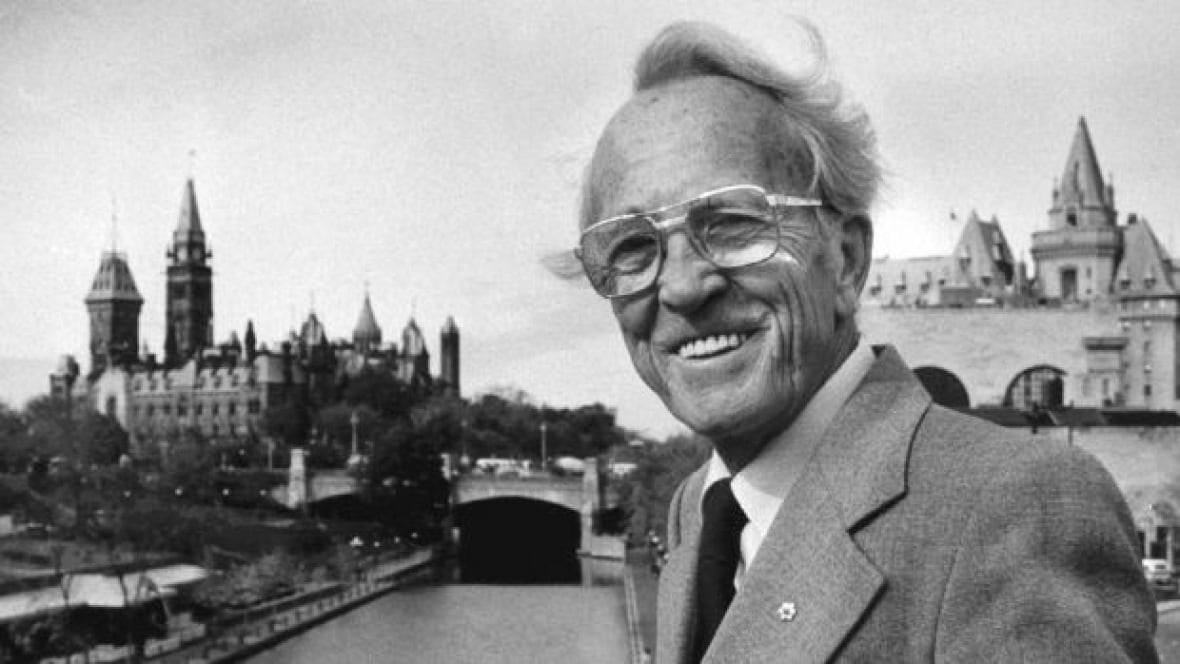 Tommy Douglas, known as “The Father of Medicare,” shown in Ottawa with the Parliament buildings in the background on October 1983. (Credit: Canadian Press)

When CBC held a contest to crown the country’s greatest Canadian back in 2004, my father voted for Tommy Douglas, the Baptist minister-turned-politician and founder of our modern healthcare system. (Douglas won.)

The U.S.-based National Parkinson’s Organization puts the cost of a DBS surgery anywhere from $35,000 to $100,000 USD. My father’s operation, as a Canadian resident and lifelong taxpayer, cost him nothing.

He still needs pills every half hour or hour or every two hours — yellow, white, red. His cell phone alarm keeps track of when he takes what. He uses a walker. Parkinson’s symptoms are unpredictable, though. Sometimes his legs stop working.

If he’s alone, strangers converge, offering help, chiding him for being out by himself, wondering if they can assist. “You want to see a miracle?” he’ll joke. “Wait five minutes and I’ll be able to walk again.”

And it’s true. When his pills kick in, off he goes.

He’s not squandering the time he has left. Since his operation in 2010, he’s enrolled in ballet lessons designed for Parkinson’s sufferers. He’s taken up yoga. He does physiotherapy; alone, mostly.

The neighbours in his Hamilton apartment building look out for him. The owner at his favorite Indian restaurant shakes his hand when he goes in for lunch. “You’ve been coming here for 30 years,” the owner says. “I hope to be here for another 30,” my father jokes. 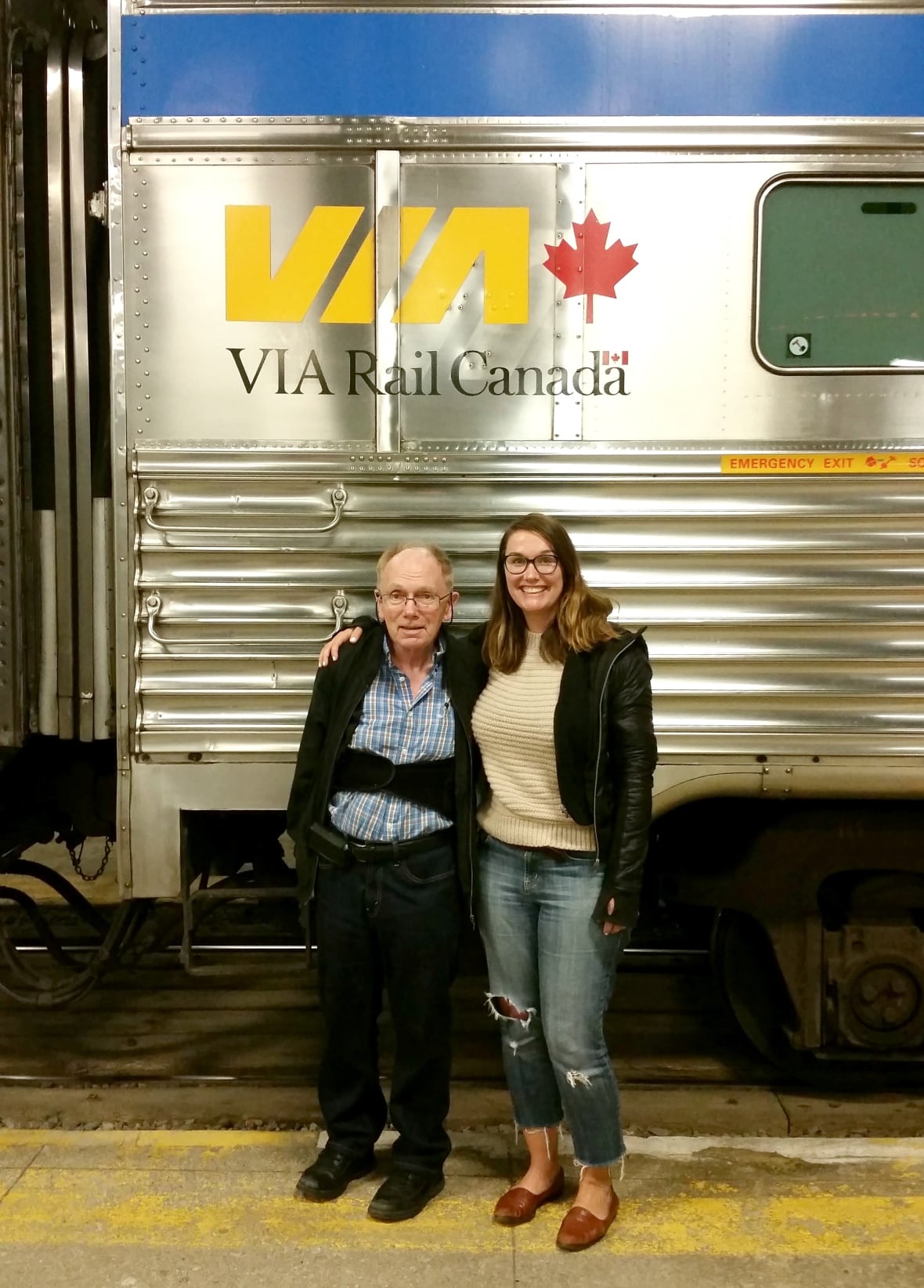 Jennifer and Terry McCartney at Union Station in Toronto, about to board their VIA Rail train to Vancouver. (Jennifer McCartney)

He’s also made good on bigger plans… like travelling across the country.

Before she died, my mother had become fixated on taking the VIA Rail train across Canada — from Toronto all the way to Vancouver. She and my father had planned to do it, once they’d retired, once she was well.

But after she died, my father and I decided that we should go.

“I wish we’d travelled more,” he said of his married years. He wants to make up for that now.

We sat in the glass-domed cars watching our country slide by.

We met widows and widowers, backpackers, tourists from New Jersey and Germany. We drank whisky and played Mad Libs. We slept fitfully in our tiny metal rooms as the cars rattled along the tracks. We got out in Winnipeg and had a taxi driver take us to the Louis Riel statue. We got out in Jasper and took photos of the Two Brothers totem pole, carved in the Haida tradition. Days later, we arrived in a foggy, wet Vancouver at dawn and we felt like we’d accomplished something grand.

We’d been witnesses to this vast landscape, and paid the country back somehow, by appreciating it.

We’d experienced something essential about this place that had welcomed him as a new immigrant from Manchester, England in 1972; a place that had taken him in and given him work, and taken care of him as he got older

Friends ask whether he’d ever move to Florida, to escape the snow. “Never,” he replies. “My doctors are here.”

At the time, my father’s surgery had seemed a normal thing: for him to volunteer for this, for him to ask for his brain to be opened. But only later did I realize what a brave thing he did.

It also sunk in how his life in Canada, with this health care system, these underfunded hospitals, these understaffed nursing departments, these underappreciated doctors who could make more money elsewhere — has served him well.

Friends ask whether he’d ever move to Florida, to escape the snow. ‘Never,’ he replies. ‘My doctors are here.’

It’s given him what he’d hoped for when he immigrated here: the opportunity to age well. Here he has access to affordable care from skilled professionals; and kindness and compassion from healthcare workers; and a life of dignity.

And thanks to the imperfect but important Canadian health care system that takes care of him — and the more than 100,000 Canadians living with Parkinson’s Disease — he still does. 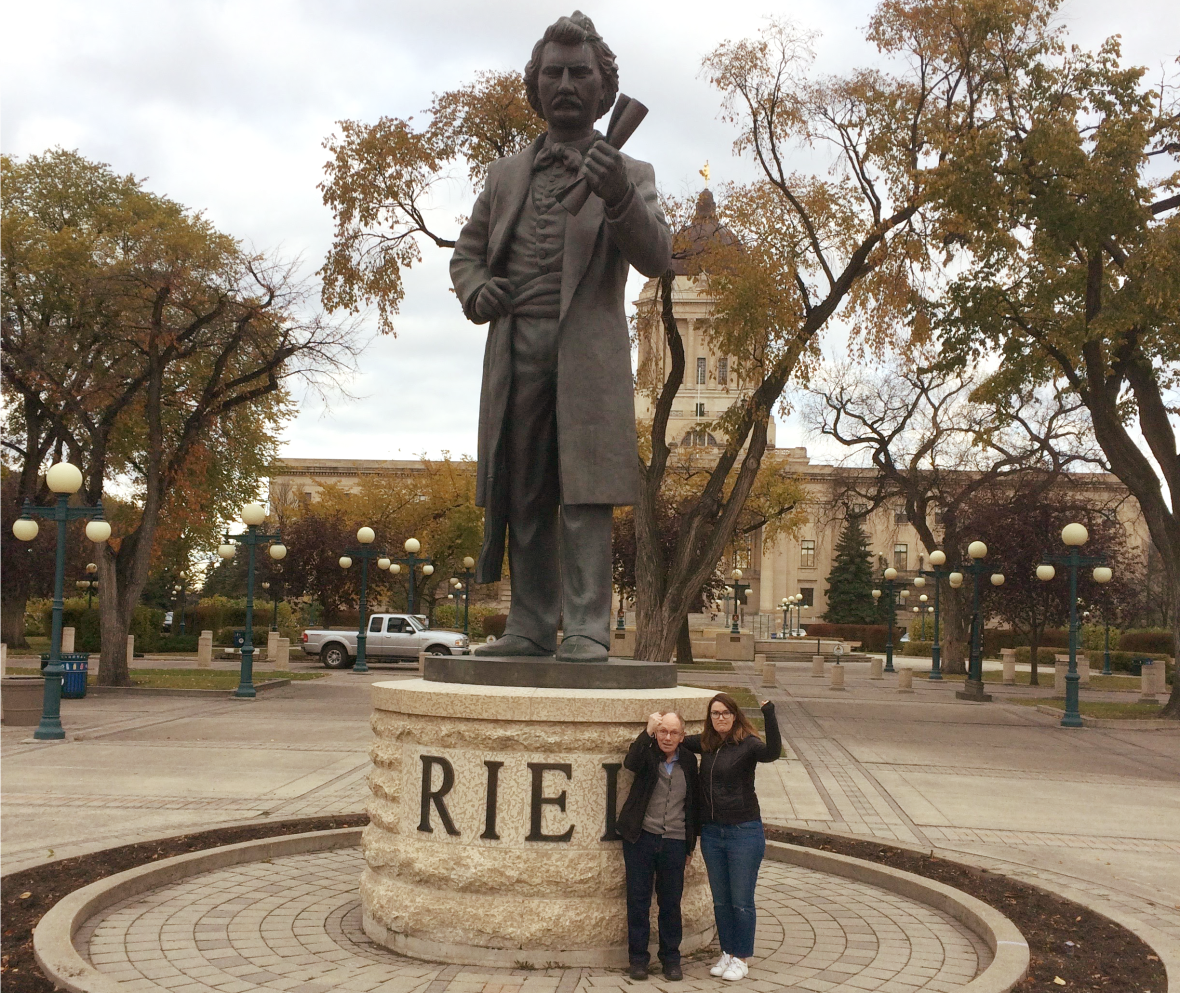 Jennifer and Terry pose with the Louis Riel statue on the grounds of the Manitoba Legislative Building.(Jennifer McCartney)